Warning: count(): Parameter must be an array or an object that implements Countable in /homepages/25/d277748687/htdocs/mission101media/kiner/wp-content/plugins/contactme/contactmedotcom.php on line 30
 Black History Month Dancer Spotlight Featuring: Sammy Davis Jr. - The Let's Talk Dance Blog - Empowering Dancers To Create A Better Quality of Life!

Sammy Davis Jr. was often billed as the “greatest living entertainer in the world”. The son of vaudeville star Sammy Davis Sr., he was known as someone who could do it all–sing, dance, play instruments, act, do stand-up–and he was known for his self-deprecating humor; he once heard someone complaining about discrimination, and he said, “You got it easy. I’m a short, ugly, one-eyed, black Jew. What do you think it’s like for me?” A short stint in the army opened his eyes to the evils of racism–a slight man, he was often beaten up by bigger white soldiers and given the dirtiest and most dangerous assignments by white officers simply because he was black–and he helped break down racial barriers in show business in the 1950s and 1960s, especially in Las Vegas, where he often performed; when he started there in the early 1950s, he was not allowed to stay in the hotels he played in, as they refused to take blacks as customers. He also stirred up a large amount of controversy in the 1960s by openly dating, and ultimately marrying, blonde, blue-eyed, Swedish-born actress May Britt.

He starred in the Broadway musical “Golden Boy” in the 1960s. Initially a success, internal tensions, production problems and bad reviews–many of them directed at Davis for playing a role originally written for a white man–resulted in its closing fairly quickly. His film and nightclub career were in full swing, however, and he became even more famous as one of the “Rat Pack”, a group of free-wheeling entertainers that included Dean Martin, Frank Sinatra, Joey Bishop and Peter Lawford.

Starred in the 1964 Broadway Musical “Golden Boy” for which he was nominated for a Tony Award for Best Actor (Musical) in 1965; he lost toZero Mostel for “Fiddler on the Roof.” “Golden Boy” also featured many then unknown or relatively unknown talents such as Roy Glenn who later portrayed the father of John Prentice/Sidney Poitier in Guess Who’s Coming to Dinner (1967); other talents included then very young performers Lola Falana, Louis Gossett Jr., who later won an Oscar for his performance in An Officer and a Gentleman (1982); and Johnny Brownwho is best remembered for his portrayal of “Nathan ‘Buffalo Butt’ Bookman” on the popular television sitcom “Good Times” (1974). A then unknown performer named Ben Vereen was Davis’ understudy in “Golden Boy.”

Always articulate, he never attended school of any kind; performing since the age of five, he was largely self-taught. 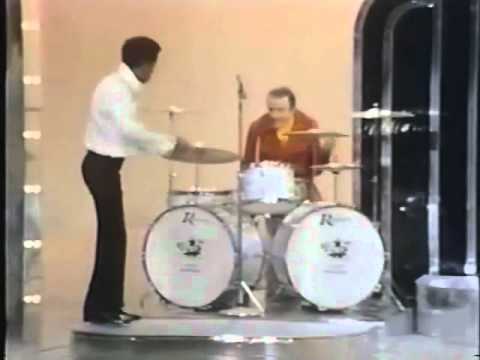 He lost his left eye in a car crash when he was on his way to record the theme song for the Tony Curtis film, Six Bridges to Cross (1955). He wore an eyepatch for sometime after that, but Humphrey Bogart ultimately convinced him to unmask when he told him that he didn’t want to be known as the kid with the eyepatch.

A chain smoker, Davis died from throat cancer at the age of 64.

He was inducted into the International Tap Dance Hall of Fame in 2005. He was awarded a Star on the Hollywood Walk of Fame for Recording at 6254 Hollywood Boulevard in Hollywood, California.

Ashani Mfuko is a Social Media Strategist, Digital Marketing Specialist, Award-Winning Blogger, and Professional Dancer. Ashani works with small businesses, corporations, & non-profit organizations as a Social Media Strategist and Digital Marketing Specialist. She creates results-driven, innovative social media strategies that are proven to increase your revenue and catapult your brand to expert status in your niche! She has an extensive track record of creating and implementing successful social media strategies for her clients. She is also the Host and Executive Producer of the “Inside New York City Dance” television show on MNN, and is a proud wife and new mom. Ashani has been featured in Dance Magazine, as a “Media Maven”, as well as in Dance Mogul magazine, Inside Woman magazine, & Dance Studio Life magazine, in addition to various dance blogs online. She is the author and creator of the, “Finance Your Dance: How To Turn Your Passion Into Profit“ e-book and workshop, and her dance blog won the Reader’s Choice, “Top Dance Business Blog” of the year award, two years in a row. She is a leader in the field of social media and digital marketing, and is highly sought after as a dance performer and dance teacher in the New York City dance community. Ashani is on staff at the Joffrey Ballet School in New York City, and teaches Advanced Jazz classes for their Jazz & Contemporary program & Ballet program.

GET SOCIAL WITH ME!